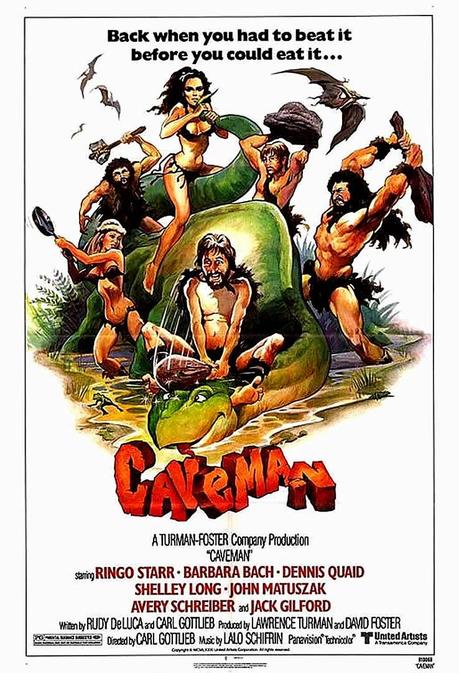 In my time, I like to think I’ve seen many movies from all across the spectrum. Some were terrible, some glorious, and some somewhere in the middle. Then there are movies like 1981’s Caveman, starring Ringo Starr. Is it good? Not particularly. However, unlike other movies, I’m still not sure whether Caveman is bad based on execution, or just a lack of material to work with from the start. Even so, there might be some fun to be had if you’re in the mood for a dopey comedy that’s fittingly primitive.

Caveman is a 1981 slapstick comedy film directed by comedian Carl Gottlieb in his feature length directorial debut. Odd as it may seem, there was a period when caveman movies featuring stop motion dinosaurs and cave girls in skimpy fur bikinis seemed to be all the rage (it was a simpler time) with When Dinosaurs Ruled the Earth (1970) and my personal favorite, One Million Years B.C. (1966) being particular stand outs.

Though I’ve yet to be able to confirm this, Gottlieb’s Caveman seems to have been intended as a spoof of this style of movie. It seems to have had a decent budget with an interesting cast including a young Dennis Quaid and former Beatle Ringo Starr, and even employing special effects artist Jim Danford of When Dinosaurs Ruled the Earth fame for most of it’s stop motion effects. Upon its release, however, the film was received poorly by critics and only made back a measly $15 million at the domestic box office.

After this, Caveman seems to have had a respectable life on television and home video. As far as I can tell, the film doesn’t have much of a cult following, but it’s not totally unknown either, even managing to get a descent DVD and Blu Ray release.

What is Caveman About?

Beginning in the year One Zillion B.C., Caveman follows the story of a small tribe of cavemen lead by the massive and strong Tonda. Atouk, the tribe misfit and weakling, is often brushed aside and delegated to testing various plants to see whether or not their poison for the rest of the tribe. However, Atouk is attracted to Lana, Tonda’s mate.

One day, while attempting to, shall we say, get primitive with Lana, Atouk is discovered by Tonda and forceably banished from the tribe. However, when he finds more misfits out in the wild and forms his own tribe, Atouk plans to return, defeat Tonda and claim Lana as his own.

What Happens in Caveman?

As you could probably guess, Caveman, a movie about cavemen, doesn’t have a particularly deep plot. Even so, the short summary above is far more engaging than the plot itself. To be fair, that seems to be somewhat the point, as the movie itself doesn’t try to be engaging. Just amusing.

In this context, it’s important to remember what Caveman is. A movie that’s trying to spoof the caveman movie genre of the late 1960’s and early 1970’s. Most of those movies were primitive love stories, so having one here as the main focus makes sense. However, in what I can assume was an attempt to be funny, Atouk’s feeling for Lana feel more lustful and creepy than romantic. I suppose that could be funny if handled well, but it just isn’t, and comes across as more uncomfortable than witty, particularly in a scene about a 1/3 of the way through the movie where it’s implied that Atouk has drugged Lana and is attempting to rape her (he doesn’t succeed due to slapstick).

It also doesn’t help that the character development is pretty shallow, resorting to one or two character traits at most for each. Granted, this might have been somewhat intentional as most caveman movies aren’t particularly known for their strong character development. However, here the traits are more to make running gags that don’t really work than to progress the story, which makes most of the characters forgettable and makes the movie drag.

However, I struggle to really feel strong negative feelings towards Caveman, because the genre its attempting to spoof doesn’t have that much material to make fun of. At least, not that you could make a feature length movie out of. As a whole, Caveman’s biggest problem comes from a lack of a concept all it’s own and any real direction. Too much time and attention was spent on jokes and gags that didn’t work while ones that had potential felt wasted on throwaway jokes that were never really taken advantage of. One in particular was a caveman who speaks in english (all the rest speak in a made up caveman language, like other films of the genre). That’s a funny concept, but it’s barely used and, even when it is, the english is still too primitive to really stand out from the rest of the dialogue, making the scene just feel awkward.

It’s not all bad though.

As stated before, Caveman employed Jim Danford to do it’s creature designs and most of it’s special effects (he was forced to abandon production about 2/3rds of the way through development). Though he’s not up to Ray Harryhausen level, his stop motion is still really impressive, and his creature designs are satisfactorily derpy. Every time the T-rex or the Lizard would show up on screen, I actually found myself being entertained, and having a good time. However, there just wasn’t enough of it and, like everything else with the film, their appearances seem to be left as throwaway gags that are never really taken advantage of.

In hindsight, I can’t really think of anything the film does especially badly (aside from the relationship of Atouk and Lana which is just….awkward…in a bad way). The problem with Caveman, however, is that it also doesn’t do anything all that well and, even when it feels like it’s onto something, it never takes advantage of it while devoting too much time and attention to gags that just don’t work.

Is Caveman a Good Movie?

Shot answer, no. While perhaps not awful, Caveman isn’t a good movie either. Sadly, it also doesn’t really succeed as a movie that’s so bad it’s good. It just kind of sits in this awkward middle area without much appeal. If you’re a big fan of those caveman movies from the late 1960’s and early 1970’s with stop motion dinosaurs and hot cavewomen wearing skin bikinis, you might get enough out of it for a viewing or two but, for anyone else, there just isn’t much here.

Fun Fact: Lana was played by Barbara Bach who Ringo Starr met and married because of this movie. In other words, Caveman has an important role for Beatles history, so Beatles fans might want to see it for that reason alone.